Lucinda McDermott’s roles include such diverse performances as The Dream Time, Elvis People (world premieres), Big River, A Wonderful Life, Magic to Do (premiere), and her one woman show O’Keeffe! which has been produced Off-Broadway and toured extensively around the country and in Bermuda. She has done stage, TV, film and industrials in New York and throughout the United States.

Lucinda is a member of Actors Equity Association and the Dramatists Guild of America.

WINGS by Arthur Kopit at Firehouse Theatre in March, 2018

This past September I was involved in a great project, the staged reading and backers audition for Woman of Light, a rock opera based on the life of Mary Magdalene written by my dear friend Michele Wagner. I was in London for two weeks to assist anyway I could, and ended up being in the cast directed by the wonderful and amazing director, Marc Urquhart. How was it being in a play in the West End? Pretty far out. We performed September 21, 2012 at the Charing Cross Theatre. 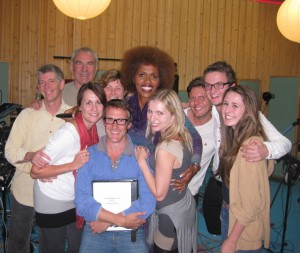 Lucinda with the cast of “Woman of Light” after recording in Studio Pool in London.

In October I was privileged to work with my son, Dante Piro, for the first time in a show. We were both in Pinkalicious, the musical, at Roanoke Children’s Theatre in Roanoke, Virginia. I played Mrs. Pinkerton and Dante played the role of – wait for it – my son Peter. It was a ton of fun, kids loved it, but the best part was working with Dante. Check out the excellent review in the Roanoke Times. 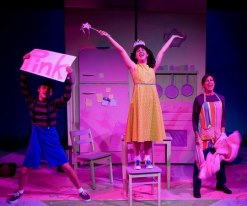